The argumentation of this thesis advances the following hypothesis: contemporaneously the hypostasis of corporeality is achieved through collective proximity of female body forcing equivalence between the body and public good. In other words the female body becomes, de facto, a collective property. Mainly there are two consequences of this dispossession. The first one is the transformation of female existence in a corporeality derivate in a upper signification of female body within the society, by making It profitable, thus by its transformation in capital and its manipulation through everyday social practice. The second consequence, situated on antithetical pole is the abstraction of the female from her own body, leading to a paroxysmal form a sort of fear of the body.

Fundamentally different, the two consequences corporeality communization place the female body in a phallocentric speech invested with historical constant value. Thus, whether we consider a upper significance of feminine corporeality by means of the cult of the body and its institutionalization at the community level or we associate the corporeality communization with obstinacy to forget about one own corporeality, we operate with a patriarchal definition of the female body. In other words, we reiterate an epistemological paradox: although the scientific approaches aim the male body, the female body is further defined androcentric. The second part of my paper is rejecting a particular case of communization of female body which is to be found in the interdiction of burka in France. I am suggesting that the interdiction is based on the way in which female sexuality is colonized by the hegemonic power of male sexuality. 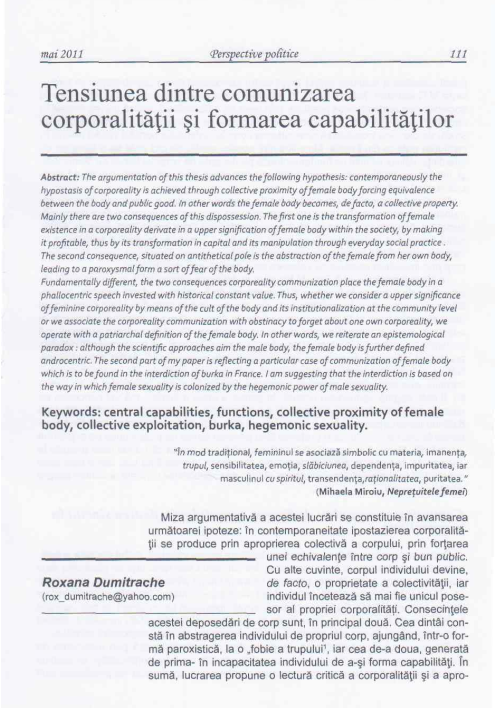