Trying to integrate the morals into institutional structures seems a good concern in itself. Often, people ask what the values in the society are or which values should be institutionalized and promoted at the institutional level. Each of us take part in discussions about what kind of morals and values should be included or promoted in the Romanian post-communist society, especially in the context of a "moral crisis of the political system". Discussion is important forasmuch the institutions underpin any integrated society. They influence individual behaviors and exert the social control. They require specific and persistent patterns of organization and development of interaction between individuals and social groups. The institutions are designed to satisfy the strategic needs and values, so they are crucial for the survival of society. In the political case, their role is to strengthen political stability and democratic order, including the contribution to internalize the democratic approach in society. Thus, the question of beginning this exercise is this: There can be justified a connection between the moral and the political- institutional order in a democratic system? If yes, what is the nature of this relationship? To analyze this issue of concern, I'll show the meaning and conditions of the democratic institutionalization in the light of a contractualist framework. The analysis is completed by the normative individualism principle. Thus, I examine the effects of political institutions at both the social and the individual actors’ level. 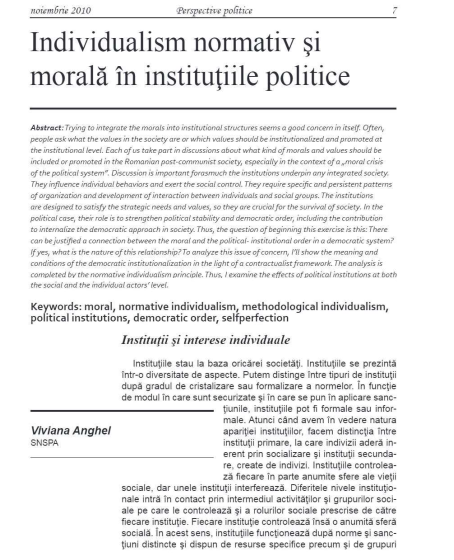