Construction of each government policy designed in part, during the years after the Revolution, included more or less religious freedom issues. Citizens were satisfied with the freedom gained after the 1989 Revolution without questioning too much different concerns aimed by minorities, such as religious freedom. Many of them once entered into the public debate were often treated with disregard by policy makers able to correct the deficiencies raised. Legislative journey of religious freedom legislation deserves attention because it highlights the degree of democratization and people's perceptions of society on sensitive issues. To what extent this legal framework meets the expectations of Romanian citizens? Does this law facilitate the religious freedom in Romania? Is the religious freedom guaranteed for the religious minors? Does this legal framework meet the demands of religious dynamic in Romania and Europe? These types of questions, and others similar, I'll try to give an answer throughout this article. Based on documents, facts and testimonies I’ll try to evaluate the present situation of religious freedom in Romania. There is currently a contested legislation, but more than that, the reflexes that have mattered significantly in enacting such a law. The influence of “cults” (recognized by government religion groups) or just religious groups for the drafting, the lobbying various interest groups, the interventions of NGO, the voices of different personalities involved and the attitudes of the political class through the process of drafting the law, gives an overall complex view over this process that has as result the law of religion valid since 2007. In this context it is remarkable to note some of the external interventions to the bill proposed for approval along with the reactions that followed promulgation. Because the law still does not have normative rules, and the debate over these has not been pursued, it is premature to outline the consequences, although they have already being raised. The research stage could not be completed since there is a law, but functionally works by exceptions. 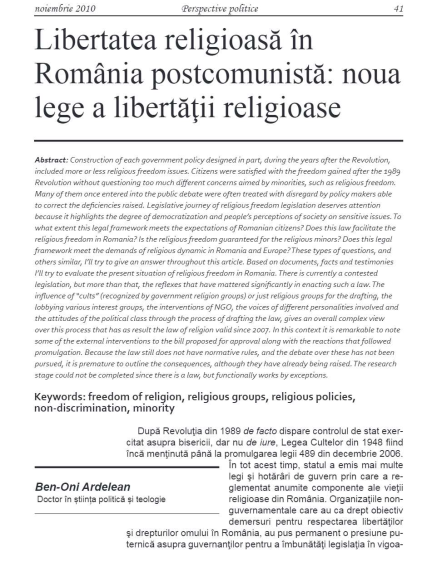