A critical review of resilience in international relations

In the context of evolving challenges, EU member states are faced with vulnerabilities for which they are not prepared such as economic crises, populism, fake news, disinformation campaigns and pandemics, therefore the EU underlines the importance of resilience in countering these threats and achieving its foreign policy objectives. Although used in different areas such as psychology, economy, industry, in International Relations resilience was defined in different terms by various institutions, but the common ground resides in acknowledging resilience as the recovery and adaptation after an adversity such as an economic crisis or natural disaster. Moreover, resilience can be strengthened by preparing the population for better coping with future disasters and crises.

Given the differences in understanding resilience between different international organizations, as NATO that approaches the term as the resilience of infrastructures, or the EU that refers mainly to the resilience of partner states but targets to strengthen EU’s resilience for its global ambitions and the lack
of readiness in our region, there is the need to foster research on this subject and to operationalise the concept. For the EU, Resilience is the central objective of its development & humanitarian assistance but it is also the response for how to sustain progress in the transformational agenda of the EU, although
the EU admits there are not indicators of resilience and nor it specifies how this will be undergone.

I attempt to approach the concept from an academic perspective, reviewing the literature on resilience and arguing that the study of political culture named The Civic Culture (1963) written by Gabriel Almond and Sydney Verba offers relevant insights on the study of resilience. Starting from the surveys they conducted in the United States, Britain, Italy, West Germany and Mexico, they aimed to establish in which type of political culture a liberal democracy is most probably to appear and develop and I consider that their indicators are also useful when studying resilience. I will create a working definition and present the
main critiques towards the concept, to which I add the one that came into my mind after the Coronavirus pandemic started: is the state after an adversity the same as it was before or not? After a disaster there is only one way through the previous normality or there can also be a new balance? I could exemplify with the Coronavirus pandemic- if individual liberties are limited or social cohesion is broken the new situation is still resilient/normal?

In this context, the research question is which type of political culture reflects a resilient society. The purpose of the study is to operationalise the concept of resilience based on the set of indicators derived from Almond and Verba. The objectives of the research are to provide a critical literature review on resilience in International Relations; to operationalize the concept, establishing the dimensions, and indicators. The challenges of this research are related to the fact that there are significant differences among the definitions offered by the existing literature and the use of the concept by different international organisations such as NATO and the EU. The main sources would be the literature on political culture, resilience and official documents such as EU Grand Strategy, the 2012 EU Communication on Resilience, the 2013 Resilience Action Plan, the 2015 Resilience Marker and Compendium, the 2017 Joint Communication of the EP and the Council “A Strategic Approach to Resilience in the EU’s External Action”. 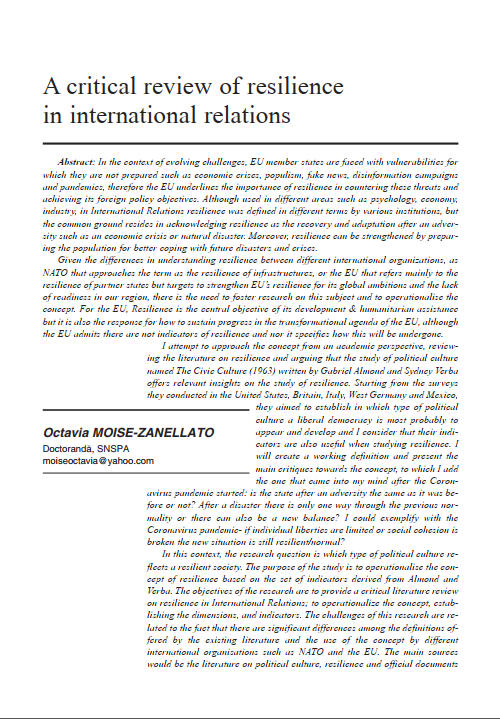