The Party, the Great Redeemer: an existential-political commentary on Orwell’s 1984

Given its multifaceted relevance, Orwell’s 1984 has enjoyed a plethora of theoretical and artistic interpretations. However, I have not come across any such interpretation concerned with the ontological temporality of the novel, i.e. not its narrative development, but its use of temporality as the basic horizon of self-awareness, both existentially and politically. Considering this to be a key feature of both Orwell’s novel and totalitarian systems in general, I have taken upon myself the task of loosely exploring such an approach. As it will become apparent, I rely strongly on Heidegger’s account of existential and historical time (especially his concept of Being—towards-death). Basically, I will try to provide an existential account of totalitarianism as the resulting systemic product of the flight from the Beingtowards-death in particular, respectively an attempt at subduing temporality, in general. In addition, I will make, when deemed necessary, several contextual references to other thinkers such as Foucault, Nietzsche, Freud, Plato and Gadamer. 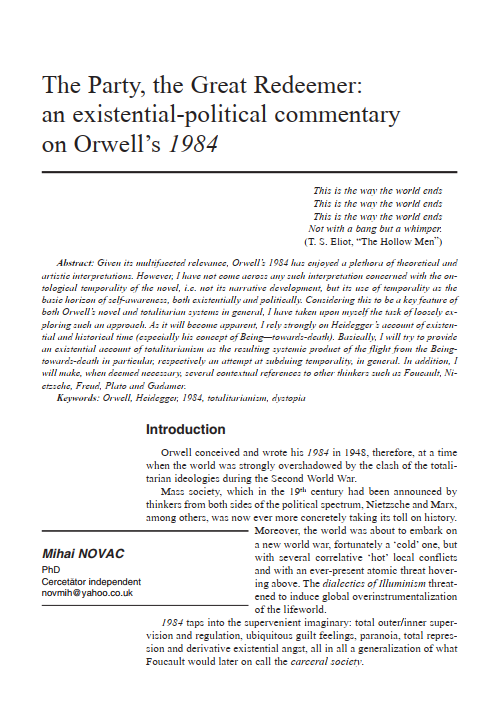