The importance of the ideologies in the current political landscape is often disputed or questioned. Some argue that most of the political forces moved towards the center in the last decades; they state that the catch-all model was embraced by former Conservative, Liberal, or Social democratic parties. Others consider that the ideological hegemony of neoliberalism erased the doctrinal boundaries that used to separate the Left from the Right. These discourses suggest that today’s political confrontations are in fact pseudo-conflicts because they lack an ideological background. In the present article, we contribute to the realization of an overview of the current relevance of the political ideologies by focusing on aspects linked to the recent history of the European Left.
The relationship between the Party of European Socialists (PES) and the Eastern European Social
democratic parties was often characterized by difficulties. We observe the dynamics of the relationship between PES and the Romanian Social democrats, highlighting episodes filled with tension as well as moments of fruitful collaboration. Moreover, we discuss the messages of some relevant leaders in the European electoral campaigns, and we analyze the political profile of some Romanian Social democrats that occupied important positions in the European Parliament or the European Commission. The article also reflects on the impact had by the evolution of Social democracy on the development and the stability of the European Union. One of the main conclusions of our study is that the cultural and economic differences between the Western democratic Left and the Romanian Social democrats indicate that the relevance of the ideologies should not be underestimated. 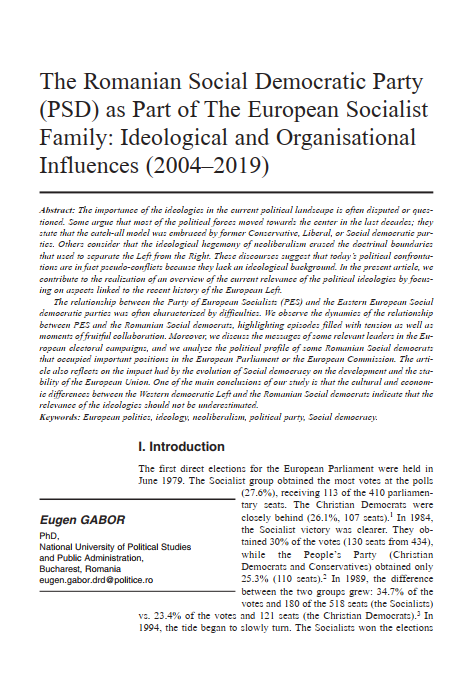