The main objective of this paper aims the distribution of finite resources under the imperatives of collectivist institutions and a governance based on the precepts of socializing the means of society. In the first instance theoretical formulas will be used that propose methodologies for governing the common goods from the ostromian perspective (Ostrom, 2007) and alternatives for overcoming the dilemmas of collective action starting from basic concepts (Hardin, 1968), respectively forms of government that can overcomes the excesses of users of common goods that inexorably lead to the spoiling and depletion of existing resources. Complementary to this preliminary discussion necessary for further operationalization I will use the theoretical model that explains, as an extension, the typology and functionality of natural resources and according to this link between combined theoretical models I will determine what type of asset each institutional form proposed for governing assets mentioned above.
The final section will be dedicated to determining which type of institutional alternative, for the governance of common resources, is joined by the socialist ideological approach when talking about the collectivization of agriculture and the institutional form that agricultural associations must take, respectively in which typology could allocate the goods, following the de facto analysis of the agricultural collectivist type organization for the socialist period, in the same way of working – identifying institutional arrangements, typology of goods, in order to identify possible inconsistencies between the normative, declarative ideological model and its implementation in real social space.
The study starts from the socialist ideological assumptions regarding the governance of agricultural households and tries to test whether the factual representation of agricultural cooperatives in Romania and implicitly in the general ideological project overlaps and fulfills the theoretical aspirations regarding the collectivization of agriculture. For these it will be considered to formulate research questions and consult the extensive bibliography in the field of agricultural groups proposed by the socialist frame of reference. 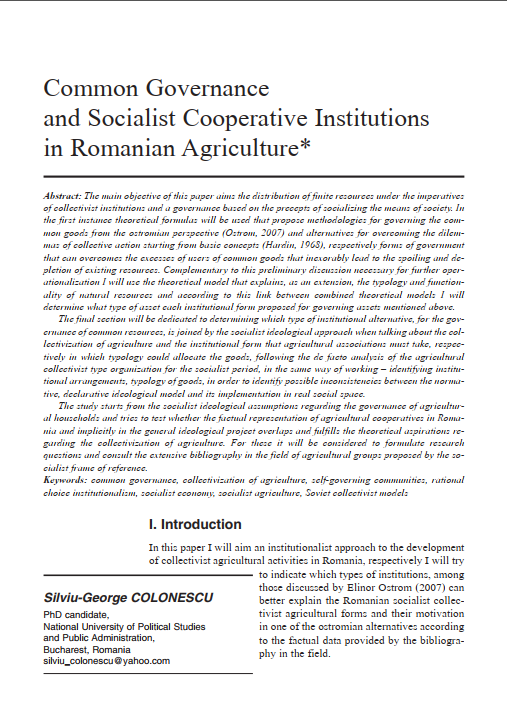