Political Myths in The Context of Political Symbolism: A Case Study on the Social Media Discourses of Three Romanian Politicians*

Focused on the topic of political symbolism and political mythology, the purpose of this article is twofold. On the one hand, the aim consists of exploring certain essential elements of political symbolism, mainly through the appeal to the viewpoint of fundamental authors in the field such as Raoul Girardet, Gilbert Durand, and other relevant authors in the context of this study. On the other hand, the purpose refers to the scope of the application of the theoretical approach to a case study regarding the analysis of the social media discourse of three Romanian politicians on Facebook, starting from Girardet’s four political myths while incorporating them into a version of content analysis suited for this type of social media symbolic content.
The method of content analysis includes a wide variety of potential manners of methodological design and implementation, both from a quantitative and from a qualitative angle. The field of political symbolism in general and the analysis by means of political myths such as the ones of Raoul Girardet in particular also bear the potential for numerous versions of application when it comes to the exercise of discourse analysis, especially in the realm of the specificity of social media usages and content. Hence, what seemed to stand as a more advantageous preference in terms of the construction of the theoretical background whereon this case study was based ultimately amounted to the herein presumed endeavour of rendering several of the distinctive and potentially overlooked elements of these political myths more accessible for an adequate understanding of their manifold versions of appearance in fairly mundane circuits of political discourse such as those on social media. 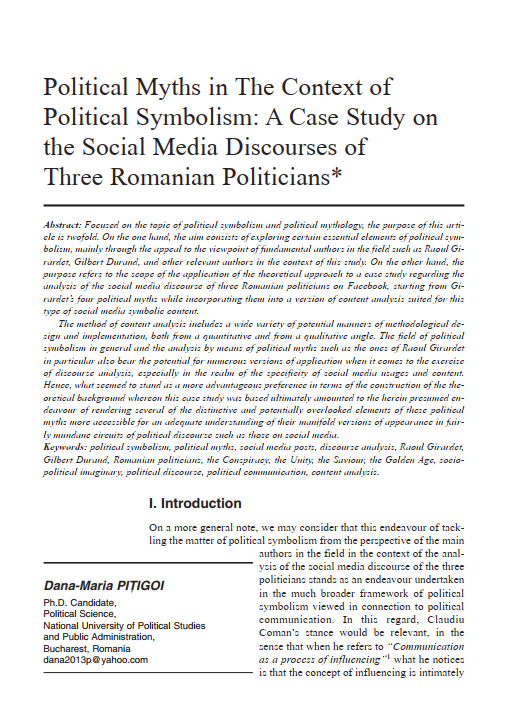