The Continuity of the Romanian Populism: The Legionary Movement as a Connection Between Fortyeighters and National-Communism*

The present paper is a stage in the wider process of analyzing the evolution of Romanian populism in the last century and a half. Although the semantic content of populism is a very broad one, the present observing a constant dynamic of the concept, I will show in this article that there is continuity in the Romanian space of the ethnic and national idea from mid 19th century to 1989, different instrumentalised on 4 major areas of thought: fortyeighters, junimists, legionaries and the Ceausescu era. Moreover, I believe that this continuity comes to strengthen a morphological conflict of the period of updating
and modernizing the Romanian society: In the last 150 years of Romania’s history, there is an antithesis showing the almost constant instrumentalisation of a right-wing populist-conservatory rhetoric by the political elite in order to achieve the popular support of the left-wing development-progressive projects. As
we cannot talk about populism, with all its avatars, earlier than the 19th century, in the absence of the psycho-sociological and identity content of the term nation and the modern doctrinal axes that appeared after the French Revolution, we selected only a few theoretical landmarks from the category of definitions.
The main emphasis is on the national idea and its continuity, because, as I show from the title, this ideological ferment brought together extremely contradictory phenomena: from the liberal and democratizing Fortyeighters romanticism, we reach the critical and conservative junimists, reactive to the romantic populism of the Fortyeighterss, then to the fascist extreme right, in order to jump to the opposite pole of Nicolae Ceauºescu’s almost Stalinist extreme left. In all this journey that the national idea goes through, in crescendo, I will put in the center of the analysis the Legionary Movement, in order to prove that it processed an existing land, transforming it into an extremely fertile one for Nicolae Ceauºescu. Moreover, I believe that we have a substantial intensification, over time, of the instrumentalization of this national idea, depending on the political needs of the authors and their capacity to exercise power. 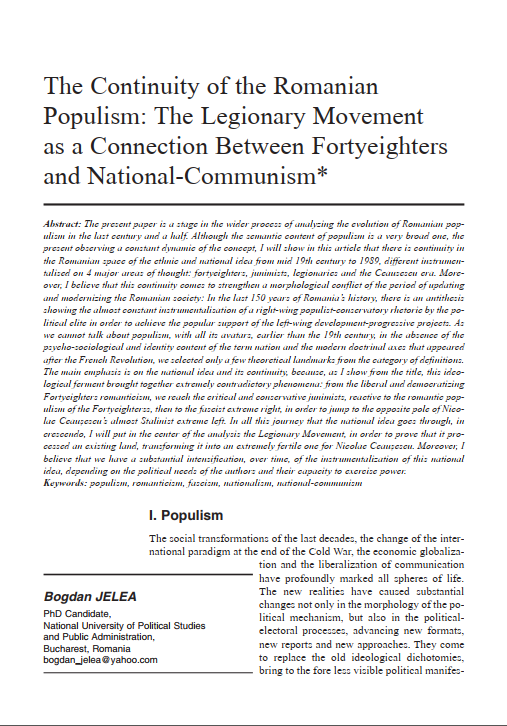