John Searle’s approach to institutions makes reference to the nature of words we use in order to describe them. According to Searle, a full grasp of the terms used in sentences such as the declaration ”this is money!” is both impossible and functionally unnecessary. This essay is a condensed version of the relevant aspects in which Searle considers institutions and intentionality, together with some critical standpoints and observations, mainly concerning the impact of the non-linguistically formulated background upon linguistically-formulated speech acts. The first part of the essay concerns Searle’s 7-tier division of facts, and various related concepts, from subjectivity to teleology. The second part focuses on institutional reality, as Searle sees it, and also regarding the views of several of his critics, most notably Barry Smith. It also reviews his more recent articles specific to the institution of money. The third part concerns key notions, such as intentionality, background and language, in an attempt to unravel more of how Searle views the interaction of human mind and behavior as it relates to the aforementioned instititions, since it is not a matter of assimilation, but of coping and relating to what Searle calls ”desire-independent” reasons for actions. 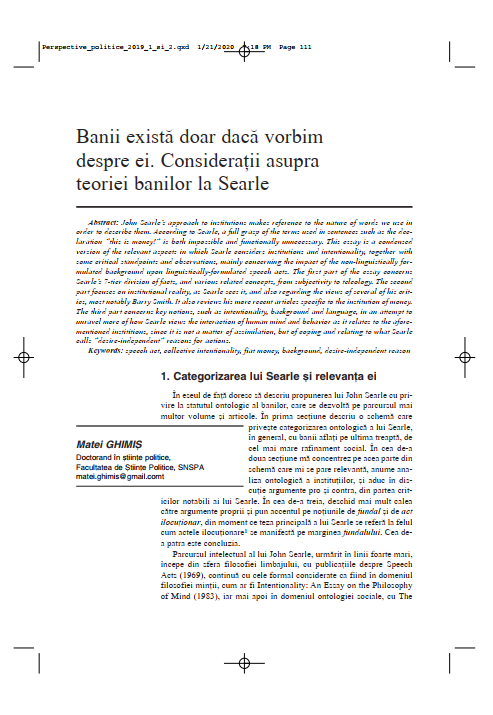