The UBI through a feminist looking-glass: can HE spot a Wollstonecraft dilemma?

As the growing debate around the policy and the theoretical implications of the Universal Basic Income prompts further discussions, one must acknowledge the issues this proposal has to face from anterior debates. In this case, the debate concerning the issue of the „Wollstonecraft dilemma” carries a lot of importance relative to the UBI. If the accomplishment of equality on the labour market and the maintenance of the difference between men and women is contradictory, the UBI can be said to have no chance of convincing feminists of its worth. I shall argue that the UBI, if the Wollstonecraft dilemma is conceived as a mostly misleading problem, can succeed in attracting the sympathy of feminists. I will begin by presenting the basic components of the UBI, some of its policy-oriented traits and then proceed to inventory the main arguments for and against the UBI from the feminist side. I will then summarily present Fraser’s „universal care giver” model, through which I will show that an appropriate amount of consideration can reconcile different and apparently contradictory contentions. Then, I will be considering the perceived inconsistencies between two systems as opposed as the care ethics and liberal feminism, only to conclude that they represent two sides of the same issue and that the UBI can be, due to its commitments, responsive to both. 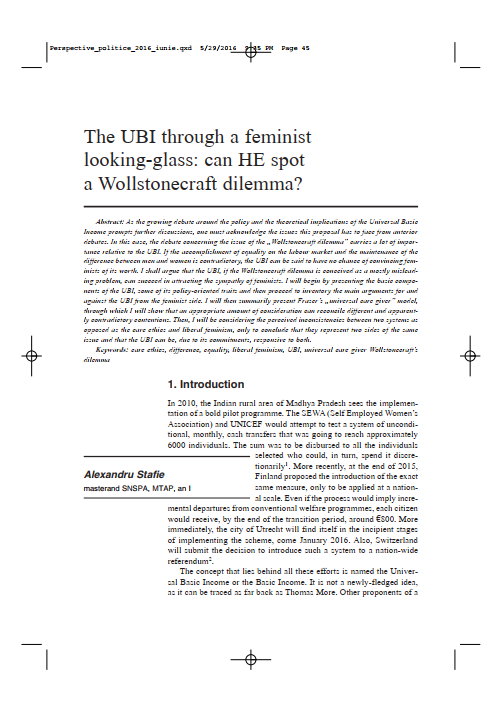